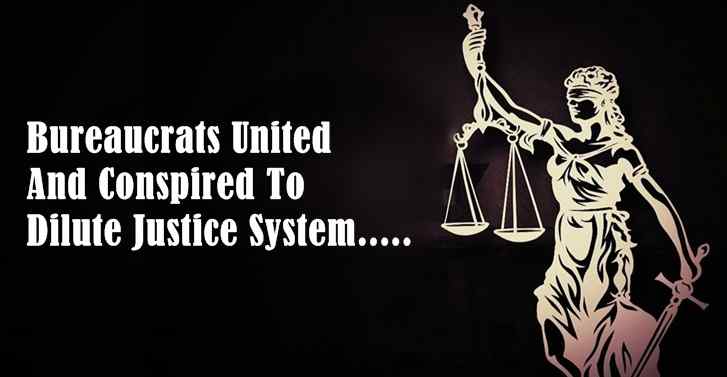 Bureaucrats united and conspired to dilute the justice system...

The âso-called public servantsâ are deliberately creating so many causes of action for a single dispute and forcing thereby the innocent common man to approach courts of law by filing litigation after litigation and thus are causing unnecessary work burden on the judiciary which results in the inordinate delay in the administration of justice.Â

In respect of criminal justice, even if the victim happens to be an individual, his act is treated as an offence against the Society at large. Therefore, the entire Society or community is concerned with such an act. It is, therefore, necessary that the Society should be protected from wrong-doers and offenders. However, with due respect and salute to a few honest bureaucrats, most of the bureaucrats appear to be corrupt, united, and conspired to dilute the justice delivery system. Possibility of a person being oppressed, harassed, or subjected to an unjust trial or illegal proceedings is not ruled out in our country.

The victims of bureaucratic atrocity are further victimized and offenders and wrongdoers are strengthened more and more by the bureaucratic unlawful unity and conspiracy. The charge-sheets are prepared defectively by the police with an ill- motive of helping the accused being acquitted on the ground of benefit of the doubt. The criminals benefited from unlawful service of bureaucrats are showing their gratitude by becoming their henchmen.