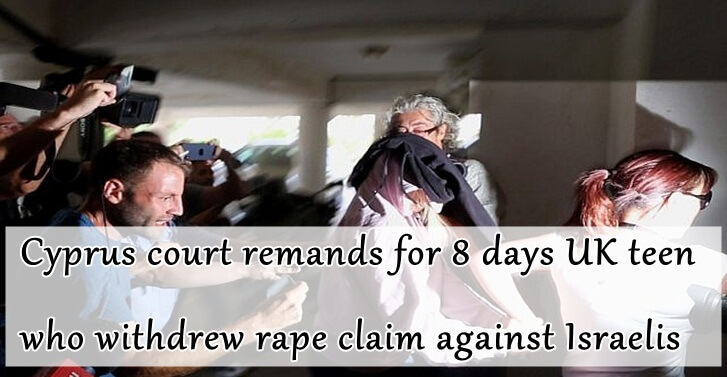 A court in Cyprus on Tuesday extended the remand of a British tourist who was arrested on suspicion of filing a false gang-rape accusation against a group of 12 Israeli teenagers, as Cypriot police prepared to file charges against her instead.

The Famagusta District Court in Paralimni ordered she be held for a further eight days, a day after aÂ 24-hour remandÂ and two days after her arrest on Sunday.

The woman, 19, who has not been named in media reports, is expected to eventually be charged with disturbing the public order, an offense that can carry up to a year in prison and a fine.

Her mother was inside the courtroom during the discussion, according to Israeli media.

During the hearing, the judge castigated the woman, telling her: âBecause of your lie you caused the unnecessary arrest of 12 teens.

âFive were released, but later you caused more suffering and the detention of seven boys,â she added.

The UK tourist filed a police complaint a week and a half ago against the Israelis, ranging in age from 15 to 18, who were staying at the Pambos Napa Rocks Hotel, on the island nationâs southeastern coast. The woman originally told police two of the suspects held her down by the arms as she cried to be let go. She said that their friends then raped her, taking turns, and that several beat her.

On Sunday, the woman revised her testimony to say that the sex was consensual, explaining that she accused the Israelis because she felt humiliated after they filmed the act without her consent and booted her from the hotel room in the holiday resort town of Ayia Napa where they had been staying, Hebrew-language media reported.

Five of the Israeli suspects had already been released last week and the remaining seven were cleared of the charges Sunday, after which they returned to Israel. They wereÂ greeted by friends and supportersÂ at Ben Gurion Airport with champagne celebrations, declaring they regretted nothing.

Some of the Israeli youths have said they plan to file a joint lawsuit against the woman. Channel 13 reported they intend claim at least 60,000 euros ($66,740) in damages and that local authorities are also considering a lawsuit against the tourist for the high cost of the investigation.

After confessing she made up the rape, the woman told investigators she had consensual sex with three of the teens but when she refused to let a fourth join in, he kicked her out of the room, Channel 12 TV news reported. She was angry at the humiliation and after telling two of her friends what had happened, they advised her to file a complaint with police.

Police have summoned her friends to give testimony in the case against her.

âIn the following days, the council of ministers will approve the installation of CCTV cameras around the city of Ayia Napa, the first of their type in Cyprus,â he added. âBecause tourists donât just have to be safe, they have to feel they are safe.â