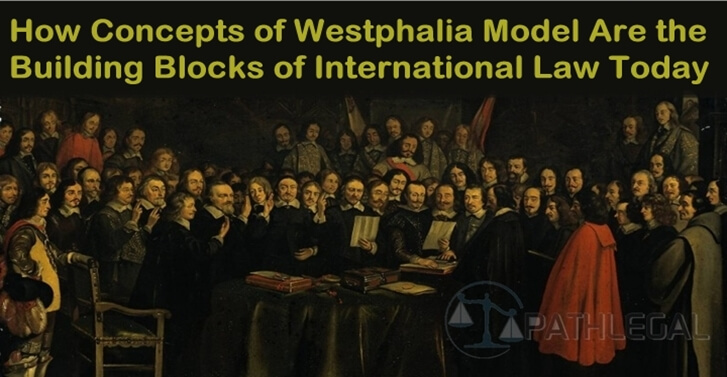 Todayâs international legal system has roots that stretch back centuries, not decades. Those who believe that international law was an outcome of World War II are subject to the axiom that âThose who fail to learn from historyÂ are condemned toÂ repeat itâ (Winston Churchill.)

Being a historian, Member of Parliament, Prime Minister, and writer, it is highly likely that Winston Churchill had in mind the Peace of Westphalia, a key foundational building block of todayâs international law.

The Peace of Westphalia, creating the so-called Westphalian System, was made of two separate agreements:

This ended the many wars fought in Europe from 1618-1638 and the deaths of eight million people.

The negotiation process was difficult and complex. It is a classic example of negotiation by skilled Advocates and lawyers for their own goals and desired outcomes resulting in a larger agreement of greater good for all. Negotiation replaced war. Law replaced death and chaos.

The potential sovereign state included well-established nations like Spain and France as well as yet-to-be-formed nations such as Germany within what was known as âThe Holy Roman Empireâ. Founded by Charlemagne in 800, it is said that âthe Holy Roman Empire was neither holy, nor Roman, nor an empire.â

âThe Westphalian systemâ is called this because the main peace negotiations took place inÂ the province of Westphalia, in the cities ofÂ MÃ¼nsterÂ andÂ OsnabrÃ¼ck. Both cities were maintained as neutral and demilitarized zones for the negotiations

Charles Rhyne stated, "The traditional European international law system dates from the Treaty of Westphalia of 1648, which marked the formal recognition of states as sovereign and independent political units.â

Joachim Whaley, a leading English-language historian of the Holy Roman Empire, mentions that later commentators such as Jean-Jacques Rousseau andÂ  Immanuel Kant both idealized the Peace of Westphalia as the first step towards universal peace. Still, Dr. Whaley points out that "their projections for the future should not be mistaken for descriptions of reality".

The expression "Westphalian model," is a convenient way to explain the fundamental juristic basis of the world organization(s) founded on the principle of sovereign equality of states, which is rooted in the whole scheme of international relations and the rules of international law.