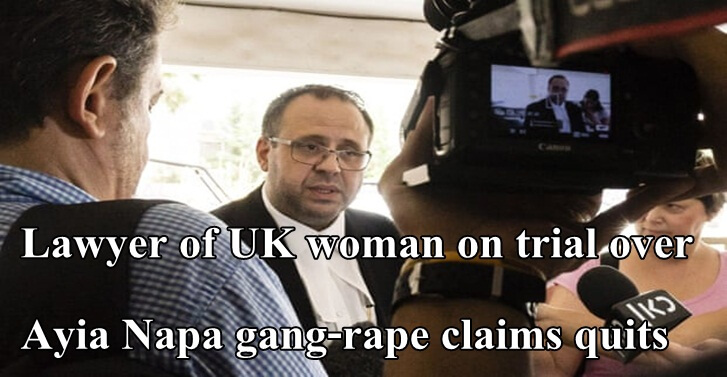 The lawyer for a British teenager facing trial inÂ CyprusÂ on charges of falsely claiming she was gang-raped in a holiday hotel has withdrawn from her case.

Andreas Pittadjis, the Greek Cypriot attorney defending the 19-year-old, who cannot be named for legal reasons, requested he be relieved of his duties citing âserious disagreementâ with his client.

âI do not wish any longer to represent the defendant as I disagree with the line of defence,â he told the tribunal.

âOnce there is a disagreement [lawyers] have an obligation toward the court, themselves and their clients to resign.â

Guardian Today: the headlines, the analysis, the debate - sent direct to you

The student hasÂ claimedÂ she was coerced by police into signing a confession revoking her criminal complaint against 12 Israelis for rape. After her retraction, the alleged assailantsÂ were released from custodyÂ and returned home.

She wept on Wednesday as Pittadjis handed her the case file and exited the Famagusta district court in Paralimni, a short drive away from Ayia Napa where she maintains the incident occurred.

Last week a judge sitting in the same court accused her of causing âpublic mischiefâ â charges that carry punishment of up to a year in prison â after she was arrested on suspicion of âmaking a false statement about an imaginary crimeâ.

Pittadjis had responded by requesting the case be adjourned so he could gather evidence, including a video that had gone viral âand which the whole world has seenâ, purporting to show several men having intercourse with the woman.

The lawyerâs abrupt departure now means the woman must remain in custody until 19 August when the court reconvenes before a plea hearing is held. Under Cypriot law she cannot be identified unless found culpable.

She was led on Wednesday to a police vehicle outside the court, hiding her face by pulling the hood of her sweatshirt over her head. On the order of the judge, Tonia Nicolaou, she was then driven back to Nicosia general prison where she is currently being held.

A spokesperson at the British high commission in the capital said: âWe are liaising with authorities. She needs to find a lawyer.â

She confirmed that the Briton is being held in a special womenâs wing of the prison where she is receiving regular consular assistance âand being well looked afterâ.

Pittadjisâs exit follows a statement by the legal aid group Justice Abroad, claiming the teenager had been coerced into signing a confession revoking the criminal complaint. Michael Polak, a barrister with the organisation, claimed she had been refused legal representation despite requests during police questioning in contravention of the European convention on human rights.

None of the proceedings conducted by Cypriot police were recorded, he said.

The spokesman for Cyprus police, Christos Andreou, rejected these claims as âbaselessâ.

The 12 Israelis were initially arrested on 18 July after the Briton first levelled the rape allegation.

The teenager, who was on a two-week holiday in the party resort of Ayia Napa, had originally told police she was gang-raped after returning to the hotel room with one of the men with whom she had already had sex.

Speaking to reporters outside the court, her mother said she fully supported Justice Abroadâs statement and that the London-based NGO would also be assisting in representing her daughter.