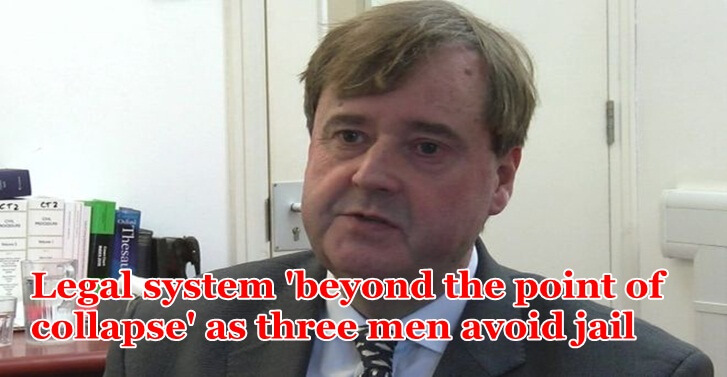 The legal system in England and Wales is "beyond the point of collapse", according to a Crown Court judge.

Judge Simon Carr gave three men suspended sentences instead of sending them to jail because of how long it had taken for the case to get to court.

The judge said it was "a disgrace" that it had taken two years and nine months to hear the case.

Judge Carr said the offence had clearly gone over the custody threshold.

He then said: "It's evidence of a system having gone beyond the point of collapse that a straightforward case takes so long to go before a court."

The judge said he accepted the "very real effect" of having a criminal charge "hanging over" a defendant.

He said: "It's that punishment that allows me to suspend what would have been immediate custodial sentences."

In December 2016 the three defendants went from Plymouth to Truro in the early hours of the morning to try to recover a debt of Â£1,000 from Abdul Basit who had previously worked for Azad.

The discussion became ill-tempered and Basit was left with a fractured jaw.

The defendants were each given a 15-month sentence suspended for two years and ordered to carry out 100 hours of unpaid work.

Simon Davis, president of the Law Society of England and Wales, said decades of cuts meant the whole legal system was "crumbling".