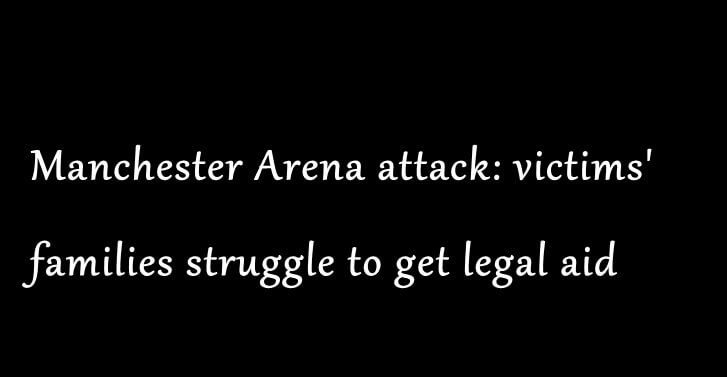 Family members of the 22 people killed in the Manchester Arena bombing have been struggling to access legal aid, a court has heard.

The warning came as lawyers for some of the families told a judge that they feared information relating to the failures of the security services, police and MI5 would be heard in secret because it was âembarrassingâ rather than because it would truly threaten national security.

The inquest is not due to start until April next year, after the trial of Hashem Abedi, whose older brother, Salman Abedi, was responsible for the attack on 22 May 2017.

At a pre-inquest hearing in Manchester on Monday, Paul Greaney QC, counsel to the inquest, warned that some of the bereaved had not yet obtained legal aid.

âWe understand that certain bereaved families are encountering difficulties in obtaining funding for representation for the inquests from the Legal Aid Agency. They have now been working without funding for a considerable period of time. The amount of work required of them has been substantial and will only increase,â he told Sir John Saunders, the retired high court judge who is sitting as coroner for the inquest.

âThere is a clear public interest in the bereaved families being represented at the inquests in order that they can fully participate. Furthermore, we have no doubt that the inquests will proceed more efficiently if that is the case,â he added.

Families of those killed in the London Bridge attack were told last month it was not in the public interest to receive legal aid at the inquests into the atrocity, while the widow of the ringleader was entitled to public funding.

Legal aid is currently means-tested, and even then it is for limited purposes. Once someone has overcome that hurdle they must then apply for âexceptional case fundingâ, which puts them at a significant disadvantage compared with the huge resources available to state bodies.

The pre-inquest review hearing at Manchester town hall on Monday heard that the security services, MI5 and the police have applied to the judge for certain pieces of sensitive evidence to be heard in private using a âpublic interest immunityâ (PII) certificate. This prevents highly sensitive evidence â often related to security matters â from being presented in open court.

This is likely to include evidence from someone referred to at the hearing only as âWitness Xâ.

But John Cooper QC, representing the families of many of those who died, said his clients feared that PII could be used to simply hide embarrassing matters rather than those that truly threatened national security.

âConsideration and evaluation of the preventative measures and steps taken by the police and the security services is at the heart of your factual inquiry,â Cooper told the judge. âNational security must not be confused with national or personal embarrassment.â

Cooper suggested âthe cat is already out of the bagâ, that there were failures by the security services, police and emergency services in their readiness and response to the attacks. A report by David Anderson QC has already concluded that MI5 had intelligence about Salman Abedi, whose âtrue significance was not appreciated at the timeâ.

The court heard that two courtrooms at Manchester magistrates court were going to be knocked into one to create a venue large enough to hear the inquests, with two further courtrooms used to relay proceedings to family members and the public.

The inquests are scheduled to begin on 6 April next year, almost three years after the attack. They had been delayed pending the extradition of Hashem Abedi, who was finally brought back from Libya earlier this month and charged with 22 counts of murder. He also faces one count of attempted murder encompassing all the other victims and one count of conspiring with his brother to cause explosions.

The pre-inquest review heard that Abediâs trial should begin before his custody time limit runs out on 16 January 2020. He will appear at the Old Bailey in London on Tuesday for a preliminary hearing.

A Ministry of Justice spokesperson said: âWe understand how distressing the inquest process will be for the relatives of those who died in the Manchester Arena bombing and weâre making changes to ensure there is more legal support for bereaved families.

âHowever, our review of legal aid showed that representation for bereaved families is not necessary for the vast majority of inquests â they are designed to establish the truth and learn lessons, rather than apportion blame in an adversarial way.

âFamilies are also given a special status at inquests which means they do not have to make legal arguments and can question witnesses themselves or request that coroners do so on their behalf.â