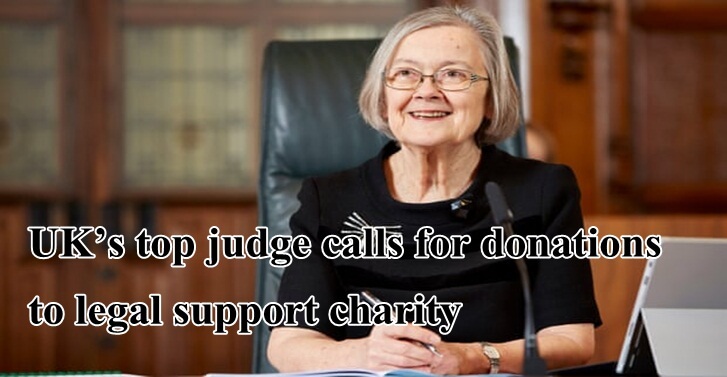 The UKâs most senior judge has appealed for people to give money to a charity whose volunteers support those who become embroiled in civil court cases but cannot afford a lawyer.

Lady Hale, the president of the supreme court, asked on Sunday for donations to theÂ Personal Support Unit. She made this weekâs Radio 4 Appeal, a BBC programme in which well-known people ask for donations to charities.

âI know how intimidating the civil and family courts can be for people without legal knowledge of help,â Lady Hale, patron of the Personal Support Unit, told listeners.

âEveryone deserves access to justice whether or not they can afford a lawyer.â She told the story of a woman helped by the legal advice charity after becoming involved in a family court fight with a former partner.

Protracted austerity since 2012 hasÂ reduced funding by about Â£950m a year in real terms, causing an alarming rise in the number of people forced to represent themselves. Lady Haleâs appeal is likely to reignite the controversy over cuts.

The number of people receiving legal aid has fallen more than 80% in eight years. Critics say the result is unnecessary conflict and stress, and unsatisfactory justice.

A year ago, the then most senior family court judge in England and Wales talked about problems caused by increasing numbers of people who found themselves without lawyers.

Sir James Munby discussed the effects of cuts in legal aid at a press conference to mark his retirement as president of the family division of the high court. âThe fact is that we have far more litigants in person in the family courts now than we did,â Sir James said in July 2018.

âThe problem is in private law cases, that is cases where the disputes are within the family, not between the family and the local authority, and by and large legal aid is no longer available for private law cases unless thereâs been an allegation and evidence of domestic violence.

âThe consequence has been that very large numbers of people are now coming to court without representation.â He added that has brought into prominence a number of problems.