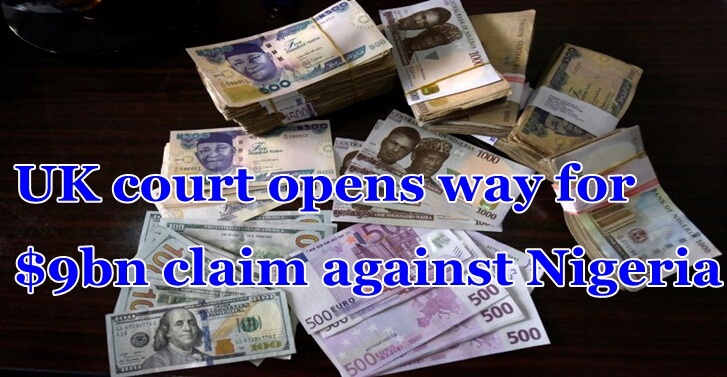 London (AFP) - A British judge on Friday gave the green light for a tiny private firm to seize more than $9 billion in assets from the Nigerian government over a failed natural gas deal.

The amount represents one-fifth of the foreign reserves held by Africa's largest economy.

The decade-long dispute pits an unheralded firm founded by two Irish business partners against an energy-rich but politically-troubled nation of 200 million people.

The 2010 deal between the Process and Industrial Developments Limited (P&ID) company -- widely reported to be registered in the British Virgin Islands -- and the Nigerian government was meant to be a win-win for both sides.

It provided for P&ID to "build a state-of-the-art gas processing plant to refine natural gas... (that) Nigeria would receive free of charge to power its national electric grid," according to the company's website.

P&ID intended to sell the byproducts from the process on the global market for "profits in the billions of dollars."

London court documents released on Friday showed that the arrangement fell through in 2012 without P&ID ever breaking ground on the plant.

It sued Nigerian government for breaching the agreement by failing to provide the gas -- or install the promised pipelines.

An arbitration tribunal in London awarded the firm $6.6 billion (5.9 billion euros) in damages in January 2017.

P&ID said accrued interest of $1.2 million a day had pushed that amount to more than $9 billion -- about one-fifth of Nigeria's declared foreign reserves of $45 billion.

The government's legal team countered that English courts did not have the jurisdiction to settle the dispute.

It told the English court that the original agreement was struck under "Nigerian law, and that as a matter of Nigerian law the seat of the arbitration was Nigeria.

The government's lawyers added that the settlement was "manifestly excessive and penal," according to court documents.

But P&ID insisted that it was up to the English arbitration tribunal to decide where the case should be heard -- and who should issue the final ruling.

Justice Christopher Butcher of the Commercial Court in London agreed.

"I am prepared to make an order enforcing the final award," he wrote in his ruling on Friday.

"I will receive submissions from the parties as to the precise form of order appropriate.

A lawyer representing P&ID said the firm intended to "begin the process of seizing Nigerian assets in order to satisfy this award as soon as possible," the Bloomberg news agency reported.